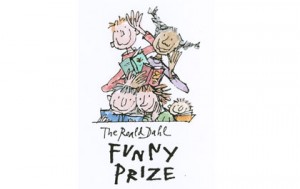 Earthlings, listen here. Perhaps you are not such lousy no-good hopeless duffers as I thought. You seem to have chosen ‘LETTERS FROM AN ALIEN SCHOOLBOY’ to be shortlisted for your so called Roald Dahl ‘Funny’ prize. I don’t really get this Earthling thing about ‘jokes’, especially as you always seem to be laughing at me, but I understand that you mean it kindly, even though the ‘laughing’ noise is so repellently grating that I must turn my ear trumpets to minimal volume to avoid it.  But, who knows, perhaps you will learn something useful from my humble book. The ‘publishers’ (Piccadilly Press), who rejoice in destroying endless forests of the timid vegetables you call ‘trees’, have even made a website:

It is only available on your sad ‘internet’ which is several million times slower than the Interplanet and operates on a mere two dimensions, but you may find it enjoyable, in your way.

Unfortunately there are some other books on the shortlist too, including one by a bizarre Earthling known as Terry Jones, who I gather collaborated in a thing called ‘Monty Python’. Was it about Gorgon’s hairstyles? Do let me know. Perhaps you will find some of these other books even ‘funnier’ than mine. I expect the writers were all trying very hard.

Ros Asquith is a Guardian cartoonist and author/illustrator of over 60 books for young people.
View all posts by admin →
This entry was posted in AWARDS, Uncategorized and tagged alien schoolboy, Funny books for kids, jokes, literacy, Roald Dahl Funny Prize, Ros Asquith. Bookmark the permalink.