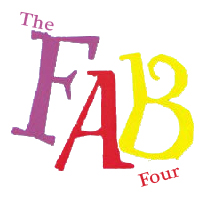 ‘Whatever she uses her pen for, be it words or pictures, Ros Asquith always manages to find something to make you laugh.’
Books Magazine

The Fab Four:
The Love Bug

Ros Asquith is renowned for her ability to bring out the humour in adolescent worries and insecurities. The Fab Four have their fair share, and Ros Asquith deals with them in her inimitable but reassuring way in these hilarious and addictive pre-teen stories.

Normally Flash prefers mucking out to making out but when she meets the gorgeous new stable boy, the plight of Flame the old pony gets forgotten. Can Flame be saved from the knacker’s yard and should Flash be let loose with a make-up bag? Drama Queen Owl’s incredibly shy but she’s got big dreams – and nothing’s going to stop her from being in the school play. Will she get the starring part or should she play something quieter, a piece of scenery perhaps?

The Fab Four:
Three’s A Crowd

The Fab Four are off on a school trip. But can Owl cope with taking part in scary activities and having to share a cabin with bossy-boots Bernice Berens? She’ll have the Fab Four to help of course.

The Fab Four:
All For One

Eclaire’s dad has got a new job, and that means moving to a new town. The Fab Four are determined to stop their favourite friend Eclaire from leaving. But what can they do to keep the Fab Four together?

Eclaire’s happy being fat but her pencil-thin mum’s got other ideas. Can Eclaire escape the horrors of the Twigs and Jumbos slimming club? Bad Hair Days. Frizzy Lizzy has tried every potion ever invented to tame her wild hair. Can her brother’s chemistry set succeed where the rest have failed? When you’re as desperate as Lizzy anything’s worth a go…